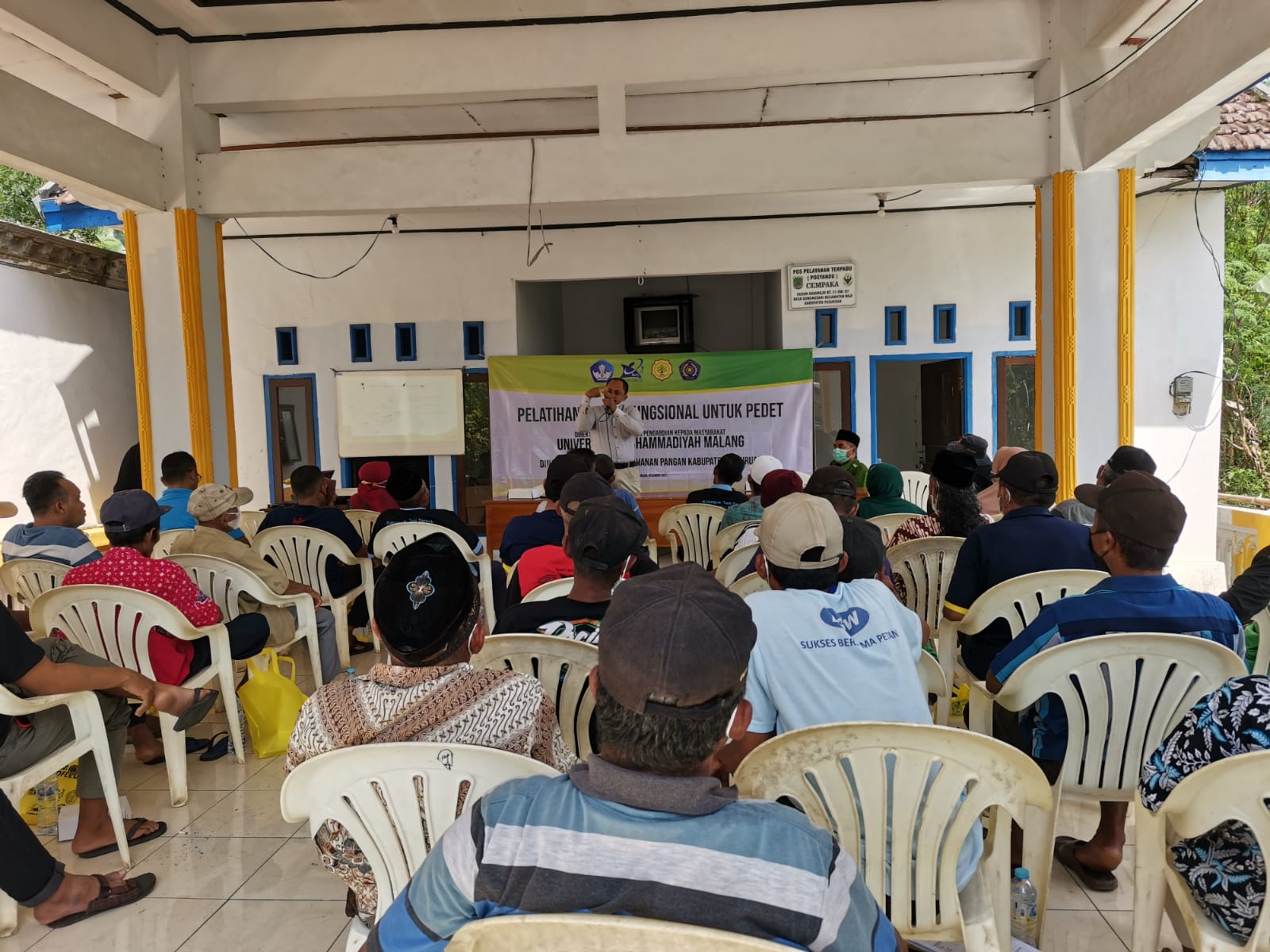 Department of Animal Science through the Directorate of Research and Community Service, University of Muhammadiyah Malang (DPPM UMM) conducted functional feeding training for calves in the 'Lembu Rejo' cattle group, Kasurejo Hamlet, Gunungsari Village, Beji, Pasuruan Regency (23/12). This training was attended by 50 beef cattle farmers from the group. M. Syaifi, S.Pt, Head of Feed and Technology of the Pasuruan District Livestock and Food Security Service, also attended this training. The resource persons in this training were Ali Mahmud, S.Pt, MP, practitioner, and Lecturer of Livestock at UMM. This training event aims to make farmers understand and be able to practice good calf rearing management and be able to adopt innovations in feed technology Calf Milk Replacer (milk substitute) and Calf Starter (concentrate given for the first time after the calf has been weaned to train the calf to consume solid feed given to the beginning of growth) in calves, said the head of the research team through the Terms of Reference (KAK) that was prepared.

The event started with remarks, one of which was remarks from M. Syaifi as a representative from the Office. In his speech, the Head of Feed expressed his gratitude to the UMM Animal Husbandry Study Program which had been willing to conduct training in the livestock group under his guidance. Furthermore, he also asked the farmers who were present to convey the obstacles they had experienced so far in raising calves.

Ali Mahmud started his material by explaining the procedures for taking care for the calf to grow healthy. The Lecturer in Animal Husbandry Study Program also conveyed the obstacles that often occur when caring for calves, one of which is diarrhea and less than optimal development of the digestive tract. This is all due to improper calf rearing management. Colostrum or yellow milk, said the practitioner, should be given to newborn cows. He also said that the calf weaning process must be carried out as quickly as possible so that the broodstock can be bred again. In this activity, he introduced calf feed consisting of Calf Milk Replacer (CMR), Calf Starter 1 (CS1), and Calf Starter 2 (CS2). CMR is given as a substitute for mother's milk in calves aged 1 to 8 weeks. CS1 was given to calves aged 1 to 8 weeks and CS2 was given to calves aged 6-12 weeks. These feeds, he said, had been tested in the experimental cages of the UMM Animal Husbandry Study Program and produced a good performance, so that farmers did not need to be afraid to apply the feeds.

At the end of the event, Ali Mahmud did a demo of the application of the feeds and continued with a question and answer process. Contacted separately, the resource person gave a response to this training, namely 'the enthusiasm of farmers for this training activity is high because farmers are very much looking forward to innovations in functional feeds to improve their calf production performance. The livestock lecturer also hopes that the Livestock Service Office will continue to implement the results of research on people's farms'.